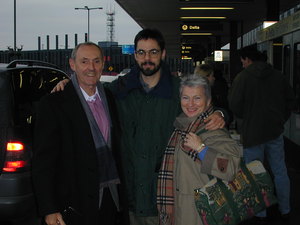 This site is a diary of my mother's fight against ovarian cancer.  For those who want to know about my mother, and how the family coped, this site is for you.  The site may also be of interest to other families who are dealing with cancer and want to understand what resources are available.

The picture above is me with my parents in Chicago, Christmas 1999, after my mother had completed her first successful chemotherapy treatments.  It's one of my favorite pictures.  Back then it seemed like we could beat the cancer.

Ovarian cancer occurs in 1 in 55 women at any age, but usually over the age of 50.  Ovarian cancer is the fifth leading cause of cancer death among women in the United States.  In the last year, 22,200 women were diagnosed with ovarian cancer and 16,200 died from it.  Worldwide more than 125,000 die annually.  Three out of four women diagnosed with ovarian cancer are diagnosed after the disease has reached an advanced stage.  Fewer than half of the women diagnosed survive more than five years.  That rate has remained constant over the past 30 years.  To her credit, my mom survived seven years and she lived longer than anyone could have hoped for --even her doctors.

The site includes news and resources on cancer research, but mostly it as a diary regarding my mother.  The entries are categorized as medical, mom, family or other keywords.   If you want to read the diary regarding my mother, you may prefer to start at the beginning with "the Call" and then read forward in time by clicking on the next entry in sequence at the top right of the page, to the right of the word "main" .  Visitors are also encouraged to leave comments by clicking on the "comments" link below every entry.

If you are dealing with cancer in your family, you may want to pay special attention to the links on the upper right hand side of each page below the heading "Resources" as well as links at the bottom of entries to articles or web sites.  A few notable links include:

I started writing this blog in January 2006 as an outlet and as a way to keep people up-to-date with my mother's situation.  Before I began, I asked my parents if they were ok with it.  I told them I would write from the heart, but with respect and not reveal anything that would be embarassing or hurtful to the family.  I also told my father that if there was anything he did not want me to write, then I would keep it off the record.  My father read the blog routinely, my mother less so.  I think she liked the idea of it, but she was living it and didn't need to read it.  She enjoyed hearing the comments from family members and friends.  My father only asked me once to keep something off the record.  That was in mid June when they were making the decision on resuming hospice and he wanted to wait until everything was squared away before I wrote about it.

Out of respect for my mother, I have omitted some medical details which I do not think make for good reading.  I also left out some information on coping with the side effects of chemotherapy. With the exception of one posting, all entries marked from January 2006 onward were written and published in "real time" as events were unfolding.  Entries prior to that time were written from my recollection, but the dates and sentiments are accurate to the best of my knowledge.  Occasionally, I have edited entries in order to correct minor factual or grammatical errors.  I will keep the site live through 2006 and 2007, though I have mostly stoppped posting new entries.

This site takes its name from the fine book "Tuesdays with Morrie" by Mitch Albom.  Hopefully he doesn't mind.

I visited your mom last tuesday. I am a member of OWGA.

Please tell your mom that it took me longer to find this blog than it did to find her house! I would get lost in a garage.

Our thoughts and prayers are with you always. Mom and Dad (Gary & Carol Hoeg) send their love and prayers. Wishing you all a blessed year. Love Cheryl

I'm writing on behalf of my Mom, Anne O'Neill, nee Tunney, a old classmate and friend of Mary's. I'm going to bring her hard copies of this as my parents are not now, nor are ever likely to be, wired, except in the traditional caffeinated sense of the word.
It's a great site, and our family remembers yours in our prayers.

Just wanted Mary and Bob to know, that a day does not go by that I don't think of and pray for my friend, Mary! I know God put Mary into my life just so I would know what a real smile from God looks like. So thanks for being in my thoughts Mary. I am truly the blessed one!

Thanks everyone for leaving comments. It means a lot to my parents. Please check back often.

hey mary, i miss you. i hope all is going well. my prayers are with you , bob, and the family daily. looking forward to seeing you in september. maybe you can come to jacksonville. if not i'll be down to see you and bob love you and be tough.

HAPPY BIRTHDAY
FROM ALL OF THE MEMBERS OF THE
ORLANDO WOMEN'S GOLF ASSOCIATION!

KEEP US UPDATED, SINCE WE THINK
OF YOU EACH DAY AND PRAY FOR YOUR
COMFORT AND PROGRESS.

Peter Groux here writing on behalf off all the Groux clan -- whose friendship with the Urlockers dates from early 1970s Whitlock in Hudson, Quebec to Errol residents Mary and Zil bumping into each other and asking each other, "Hey, don't I know you from Canada ... and don't you have twin sons who were always getting into trouble...?"

Mom (Zil) is in northern Michigan right now but her heart, soul, thoughts, love, and prayers are in Apopka. She doesn't have Internet access at the moment but asked me to make sure Mary knows that she lit a $3 candle today ... an inside joke Mom said Mary would understand.

Bob & Mary were there when Bob & Zil went through Bob G's cancer from 2000 until 2002, when my Dad lost his fight. We still miss him every day but "Bobby Blue Eyes" has saved room in his foursome in the sky for Mary, and the tee will be ready for her when she's ready for it.

With love from the Groux family....

We have heard many wonderful things about Mary here in Arizona and we just wanted to say hello-- and even though we have not met her, we know her wonderfu son, Tim and his family and we are sending "good thoughts" your way.
Love,
Christy and Will Schreiber

"When God thought of mothers, He must have laughed with satisfaction, and framed it quickly — so rich, so deep, so divine, so full of soul, power, and beauty, was the conception."
Henry Ward Beecher

Bob and Family, We have just heard of Mary's passing. She was so loved. She takes a small part of all who knew her on her journey. In return, a large part of her will live in our hearts. God Bless You All. Gene and Dot

I am Lynn Saldanha, Sid's wife. Mike gave us your site address when we saw him right after they returned home from Florida last week.

As my elderly father was with us just until a couple of days ago, I was not able to check out the site until now.

I am simply touched beyond words, along with a few tears, for I met your mom at Mike's home a couple of years ago. Nice lady! Pretty lady!

We lost my mother almost one year ago. She was in late stage Alzheimer's, and had complications from that.

Please allow me, knowing first hand how difficult and yet how important it is to say, to extend our deepest and most heartfelt sympathies.

I know that posting this site for her was not only an act of love toward her, but also an immense coping mechanism for you in dealing with the personal illness and loss of a parent.

I cry still, though getting better, for my mom. We actually "lost" her some years ago, but the rock of who she was even when not her self was apparent only when she passed.

As I know that loss is a personal thing, please do take the time to be gentle with your self, and with your family, through this time of need.

It is a process, grief is. It does take time. It is, as I have found, okay to cry and cry deep and hard and a lot. It helps!

Take the best of care!

Sorry
Whether you lose your erection during sex, or you can't get erect in the first place, you can easily use the techniques on this website to recover your potency and get hard erections which last as long as you want them to! cheap
Bye !!
____________________________
cheap source :)

Whether you lose your erection during sex, or you can't get erect in the first place, you can easily use the techniques on this side .

Bob and Family, We have just heard of Mary's passing. She was so loved. She takes a small part of all who knew her on her journey.