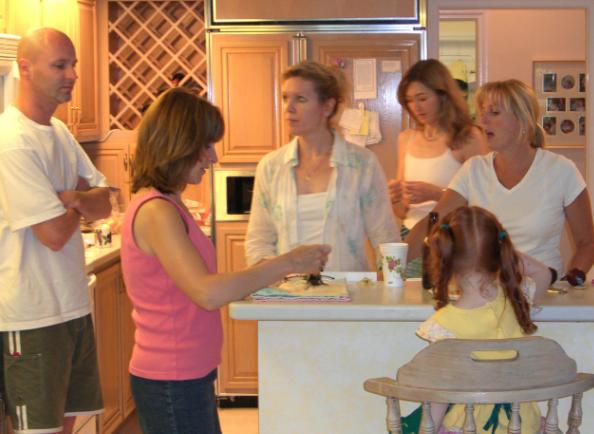 After the funeral and the reception we had family over to the house.  I was still in a fog for an hour or two after the reception, but as guests came to the house the mood changed.  The kids were playing together in the pool, neighbors brought food, we drank beer, watched the Tour De France, caught up with cousins.  We heard stories about my mother, mostly of the "off the record" variety.  We reminisced about camping trips when we were young and road trips to Allentown and Kingston to visit family.  It was a really nice time.

As my brother Mike remarked the night before, my mother was always the bright light at a party. Her spirit was there and you could see my mother in her brother Ted's eyes and in her sister Carmel's smile.

Sometime around 10:30 after everyone had left or gone to bed, I went for a run.  The heat and humidity had broken and there was a gentle rain.  I was relaxed and ran for nearly an hour as I've done countless times in the last six months.   But I felt better than I have in a long time.  I realized my mother would have really enjoyed the day.   And I guess she did.

I came across your page through an exchange with somebody in the OVCA Net website. For the past month I have read many of the concerns, insights, joy and sadness that you have so generously shared with your family and friends.
My mother is still fighting this horrible disease. As a daughter and caregiver your posts have been a source of inspiration.
Your mother was such a courageous woman, you learned well.
Zulma

From Louisiana:
Mrs. Chris passed away this morning. She fought her battle with Ovarian cancer with courage and dignity, as your mother did, too. I am relieved to know she will be welcomed by such a wonferful woman like your mom. Peace be with you all. Kristi in LA

I wanted you and the family to know how special Mary's service was. You helped all of us with your strength and peacefulness. We had to leave the reception early but a friend dropped off the crystal golf bag for me. Thank you. It will be a year around decoration in my home-not that I ever could/would forget Mary Urlocker

I found an article regarding your site in the Orlando Sentinel this morning. I am at work and should be doing other things but I found myself possessed with needing to read everything you wrote. I sit here (at work!) with tears now as I have finished every last word. I am so sorry for your loss, and I understand. I lost my Mom 2 years ago to Lung cancer. I didn't have as much time with her (we found in August and she died in November) but we too tried Chemo, marinol, and hospice. Thank the Lord for hospice. Mom was able to pass away at home, with her loved dogs, and all of her family around. We had talks the last couple of days about heaven and on the day before she passed away, she was napping. Suddenly her eyes flew open and she had the brightest smile, and she said, "I saw it! It is the most beautiful place!" Later that day she remarked about all the beautiful people standing around her bed waiting for her. (I was the only one in the room with her at that time.) I am sure she glimpsed heaven and the angels waiting to take her home. My father who had passed away years prior, spent her last night with her. We know this for sure as she had conversations with him all night long. While we could only hear her side, there was no doubt she knew who she was talking to. Before she passed, she assured me she would wait for me when it was my turn to "cross over" just like Dad was doing for her.
I am so grateful for those last days with her. If she had been in the hospital I might not have the opportunity to witness the miracle of it all.
Anyone who wonders if Hospice is the right avenue to take with a family member, be assured it is.

I am sure you have all wept tears..long and hard.It's wonderful to be with family in times of crisis.Laughing,smiling,and sharing stories is healing.
You will find out in unexpected ways..in unexpected places,just how many lives your mom touched.
You will also find love and support for your family and yourself.
What you've done here is touching alot of people..
Once again..Thank you..for sharing your mother and her journey with all of us..May God Bless you ,your family,and last but not least..your beloved Dad.
Alle

Thanks everyone for all of your recent comments. I'm glad that more folks have found the site and I hope it will be useful to them, especially the resources on the right hand side.

BTW, I apologize that I have not updated the site lately. It's been a rough few weeks and I just haven't been able to say what I want to say yet. Nonetheless, there will be a couple of more posts coming soon.

hello
how are you
“Those who mind don't matter, and those who matter don't mind.”