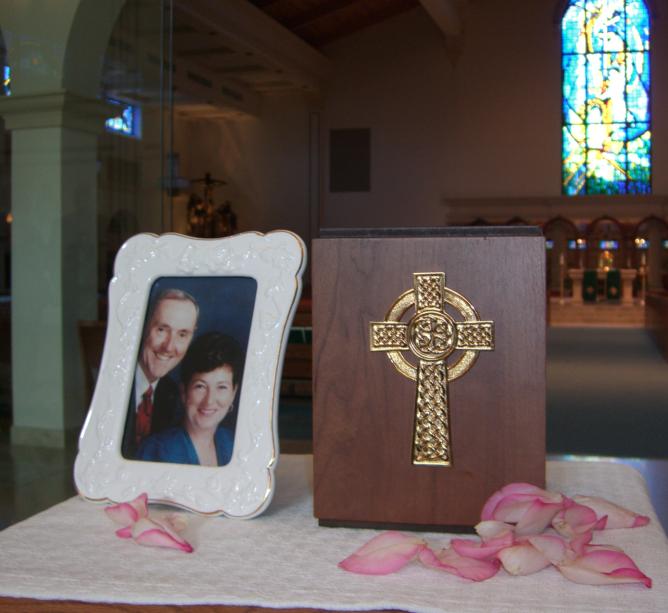 Today we had the funeral mass at the Church of the Annunciation that my parents belong to.  Many of my mother's golf friends and neighbors were there as well as my mother's sister Carmel and her son Bob, her brother Ted and his wife Joan, our cousins Kevin, Gary, Michelle and Colleen.  I'm sure my mother was pleased to be remembered by so many.  There were more than 200 people there.

My wife Gregg and Tim's wife Kelly did the readings from the Book of Wisdom and from Corinthians.  Father Bill did a nice homily about my mother and taking something from how she lived and incorporating it into our lives.

Later there was a reception at my parents' golf club.  Gregg and Kelly had set up a nice table of photos of my mother and our families along with my parents wedding album from 1957.  Gregg had also ordered crystal Christmas ornaments of a golf bag with a shamrock on it from Galway Ireland to give to all the families so that they would have a way of remembering my mother.

I got up to say a brief memorial.  I didn't think I would be able to do it extemporaniously, so I wrote it up yesterday.  Afterwards, many people got up and told stories about my mother, some light hearted, some serious, all of them touching.  Many people said that they had read the web site, which was nice.  I got to thank many people who had posted comments to my mother and I let them know that I had read them to my mother in the final days.

Here's what I said:

I'd like to thank everyone for coming, especially those who traveled far.  Also thanks to those who could not make it, but wrote, called, sent email or posted comments to the web site.  You all meant a lot to my mother.

Especially her grand kids: Austin and Cameron, Brianna and Faith, Ruby and Agnes, Lauren and Brendan who are here today.  She loved you guys and she appreciated that she didn't have to discipline you.

My mother was sometimes strict with us growing up, but I had great respect for the values she had.  I owe a debt of grattitude to both my parents for helping to make me who I am today.  She shaped all of us and she touched our lives.

The last six months, I got to see another side of my mother.  She knew she would not live the year, but she still had kindness, humor and strength.

She accepted what was happening.  But she went with a fight at the end to make sure that we finished saying the rosary before she died.

Thank you to my father, my brothers, my sister and my wife for helping out in the final days.  They were tough times but they will make us stronger.  That's what my mother would have wanted.

Please raise a toast to my mother.  Mom, I miss you.

Dear Bob and all of you,

I'm so very sorry for your loss. I wish that I could have been in Florida with all of you. Unfortunately, I was not able to make it. I've certainly been thinking about all of you for quite some time now and all day today.

It's wonderful that you are all there together. One hour at a time.

Please know that I have all of you in my thoughts.

Mark, perhaps you will find a way to keep this web site going, so that we can all stay in touch.

Much love to all,
Judy Cavanaugh, Toronto

A toast will be raised at Hurstbourne Country Club in Louisville, KY tonight (Friday) in horour of Mary who still has many friends here who loved her and enjoyed the many wonderful golfing, partying, and just being together times with an unforgetable gal and her loving husband.
To you, Mary, you taught us how to laugh, cry, and play our hardest at the same time.
Flo

I am so sorry I was not home to attend Mary's funeral Mass today. I am in Montana for the summer. I know all my wonderful golf buddies were there. We all love Mary. The mountains are absolutely beautiful right now. They are the most vivid shade of purple you can imagine. It is the perfect place to remember her. I will have everyone drink a toast to sweet Mary. I will never forget her and her wonderful smile and sparkling eyes.
Lynn

Zack or Greg
I didn't know if you sent an angel to Zil Groux, your mom's dear friend that recently moved to Palm Springs?
I will be glad to send one to her on your behalf. I can stop by, if there are any left. Please let me know. What a wonderful tribute you had for your mom. Again she will be missed by all but not forgotten.
Mary Jo