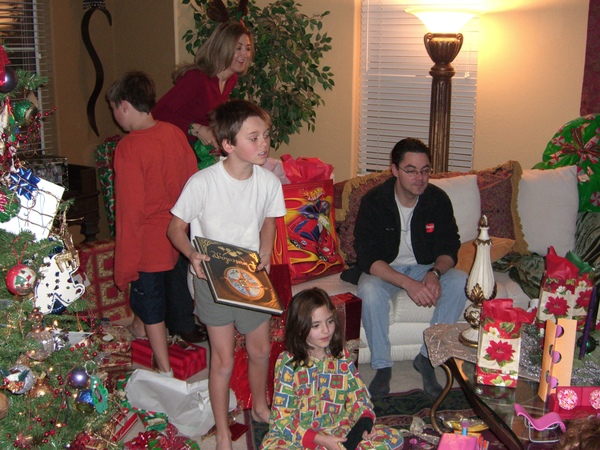 This was our first Christmas without my mom.  Gregg and I flew to my younger brother Tim's family in Phoenix and we were joined by my brother Mike, his family and my father.  It was not the entire family, but there were nephews and nieces to ensure that things were lively.  But there were times when it was very noticeable that my mom was really gone.  It was the thing that was on everyone's mind even if we did not speak about it much.

I was sad on Christmas day, but I realized that the things my mother appreciated, the festivity, the kids running around, she would have greatly enjoyed.  I'm sure she would have been playing Guitar Hero with the boys and laughing right along with them.   That image of her laughing and having fun let me relax and enjoy the day. That's what my mother would have wanted.

Tim said a prayer at dinner and got everyone choked up.  He was very close with my mom and I think he is still taking the loss quite hard.  There's a tension there that I have not seen before with him; he's usually the most easy going and social guy, but there were times on this trip when he seemed distant and preoccupied.

It's freaky, because it just catches up with you once in a while.  There have been many times over the last six months where I've woken up and thought "I should call my mom to --" and then the realization hits me that my mother's not around any more.   But I still think of her often.  I hope that she's proud of what's going on in her children's lives and that we are all living up to the potential she saw for us.

I know How you feel ' I lost my Mom Too! But I lost my Best Friend we were very close! Also now my younger sister has breast and lung cancer no medical Insurance! I have to watch her suffer because she is poor!