Tell Someone About Cervical Cancer 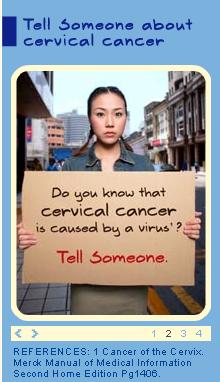 Merck launched an awareness campaign recently to encourage women to tell someone about how the HPV virus can lead to cervical cancer, one of the leading forms of cancer among women.  Merck has developed several different web sites (maketheconnection.org, hpv.com, tell-someone.com etc),  as "public service announcements."

However, there has been some criticism of Merck's approach since the campaign was launched just before Merck's introduction of an anti-HPV drug called Gardasil.

Don't just tell someone about cervical cancer, tell everyone. The person you tell, be it a man or a woman, may end up telling just the right person and saving her life.

Also tell everyone about the HPV immunization. Girls need to get this before they're 19 if at all possible.

agreed, HPV immunization should be mandatory

I'm six months late for a dental appointment, and I'm still working on last year's taxes. The pain usually is localized in the front of the head and on the sides. This paste cleans the skin and fights harmful bacteria.
absa branch in rosebank - http://absa-ben.co.uk/seach_key.php?key=absa+branch+rustenburg
They help smokers hold onto their addiction for a little longer. Why is this significant? Inflammatory acne usually requires the taking of antibiotics. Load up on plant foods and get away from animal products--it just makes sense! Bleeding into the intestine can also occur.
absa branch table view - http://absa-ben.co.uk/seach_key.php?key=absa+branch+sea+point
Regardless of how a lot you wish to always be focused on your current Yoga system, if progressing to your current session usually takes a long time, you will end up vulnerable to skipping-and that is certainly no real for you or perhaps your Pilates software. As ta result, both the drugs were found effective in ruding the tumour size and also it protected the heart from damage. Other cosmetic options are cosmetically based lotions, shampoos and herbal supplements. The most common symptoms of appendicitis are intense, continuous abdominal pain, nausea, vomiting, constipation or diarrhea and fever. There are small activities you can do to increase your physical activity.

Activating oxygen can produce compounds called radicals that put oxidative stress on cells. Such stress could ultimately lead to cancer and other diseases.