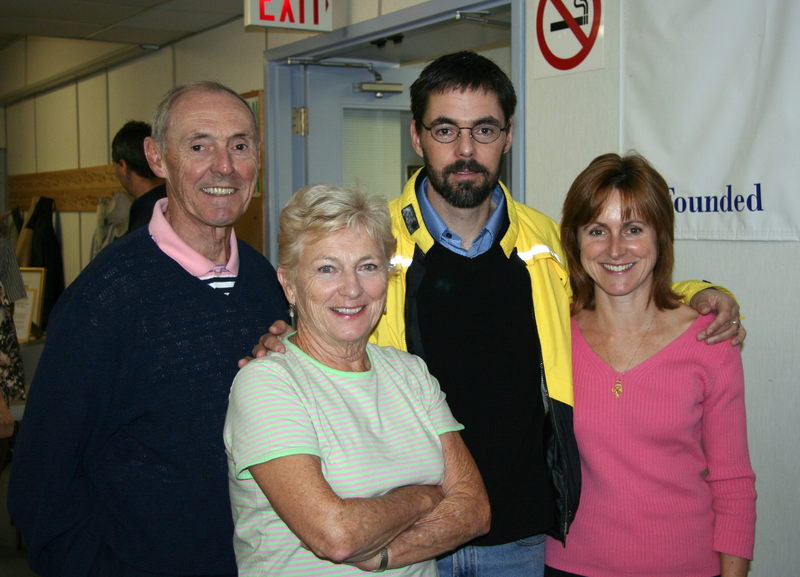 Note: This posting is something I worked on several times shortly after my mother died as a kind of conclusion, but I was never able to complete it.  I never liked the idea of having a final post, so I suppose that's why I had so much trouble with it. As we are approaching the anniversary of her death, I am now posting it as is, along with one of my favorite pictures of my mom from September 2005, before she restarted chemotherapy.

This may be my final posting on TuesdaysWithMary. At least, that's the plan. My mother passed away two and a half weeks ago and I've been stalling writing some kind of conclusion. There have been some tough days in the last couple of weeks. More than I would have expected. I know that there is a normal "grieving process" that you have to go through but knowing it and experiencing it are quite different.

I've had dreams where my mother was still alive, in her late stages of fighting cancer. That's quite haunting. And then there's just the normal thoughts that occur when I think about things she would like or something I would have told her. And sometimes there's emotional ups and downs that come out, seemingly for no reason.

Despite all the difficulties we've gone through in the last nine months, it has made us closer as a family. That can't be a bad thing. I'm glad I was able to spend time with my mother and grateful that I had flexibility in my job to be able to get to Florida so many times in the last year.

About a week before my mother passed away, I asked her if she had any regrets. She answered simply: "Sure." But she wasn't one to elaborate on negative thoughts. I have some regrets also, but they are pretty minor. I wish we had all gotten together at Christmas last year. But I don't think my mother minded, so I guess I shouldn't either. There will always be things I will miss about her. What would my mother think about this or that.

My father told me that if he had to do it all over again he might not have had my mother go through all the chemotherapy she did in recent months. Once the chemo stopped working, all she got out of it was the side-effects that weakened her and made her ill. But you always want to give something like that a chance, just in case. And there's no doubt that the chemo she had in earlier on extended her life by several years. So I don't know if anyone could decide differently under the same circumstances. Still, it's something for families to think about.

Hi Mark, I come to this website from time to time to see if you have posted anything.I have been thinking about your mom in the past few weeks and know that tomorrow will be tough for all of you. Your mom is with you, you just have to talk to her. I know she was with us recently in Wheeling, West Virginia while Ryan played in the regional tournament. He had lost a ball and I asked Mary to help me find it and she directed me right to it. All you have to do is ask........Happy Belated Birthday Uncle Bob.
Love Michelle, Jim, Ryan & Lindsay Kennedy

Hi Mark, I to like Michelle come to your website from time to time. Look thru your notes & pictures. I think of you all when it comes to holidays, birthdays and happy occasions. It is rough...I know. The first yr is rough. It does get a little easier and by that I mean...you can talk about your mom with out breaking down. As you know my mom has been gone since June, 2003. On May 4th of this yr our son Michael got married & I found myself thinking ... if only my mom & dad were here to celebrate with us. Oh...I realize they are with us in spirit and I truly believe this. It is also true what Michelle mentions...speak to them and they will answer. They come to me in my dreams & we talk.
It is up to us to ensure their names live on...by sharing stories and family get togethers from the past with our children and grandchildren. After all we are their Legacy.
Take care...Kevin